Why my company is named ‘Flagstone’

While it’s not a heartwarming story it is a good one.

I named my company after a rock climbing route that I fell off of. For all practical purposes, I should’ve died. 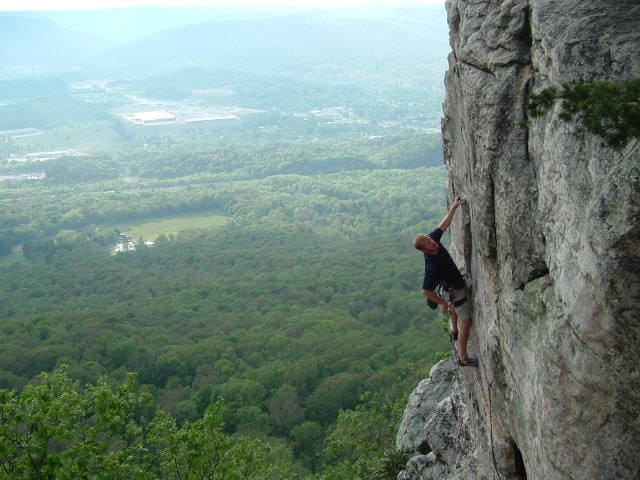 When I was in high school as a boarding student at the McCallie School, Chattanooga, TN, I was an avid climber. I spent most of my after-school and weekend days there, sacrificing football games, concerts, dating, and most of the trappings of being a teenager.

Stretching along the western face of Lookout Mountain in Chattanooga is Sunset Park, home of some of Tennessee’s finest single-pitch climbs.

Sunset has a long history dating back to the Civil War. Lookout Mountain was an important vantage point for observation of troop movements during the siege of Chattanooga. Later, in the early 1960s, sport climbers began scaling the excellent sandstone; Rusty’s Crack, one of the earliest ascents, remains a classic.

My favorite route by far was Flagstone (pictured), and not just because it had one of the best vantage points of the valley floor (From the top of Flagstone’s commanding vantage point, General Braxton Bragg watched union troops advancing on Chattanooga in November of 1863. An assault on the advancing army failed and the city eventually fell to the North.) Aesthetically and athletically, it was a great climb. It was also an A1 ass-kicker. A 7-foot overhang pitched 1/3 of the way up the 80-foot route, split by a thin crack barely large enough for a fist. In the climbing “grades” or degrees of difficulty, it was a personal milestone for me in that it was the first 5.11 route I accomplished. I climbed it dozens of times, never tiring of the poetic flow of athleticism Flagstone’s contours demanded.

However, my aesthetic appreciation for the climb wasn’t entirely the point of this story: I had a somewhat freak equipment failure while climbing Flagstone one auspicious Thursday afternoon.

I fell almost 30 feet then landed feet first perfectly on a boulder with a very small table-surface area before tumbling down the trail.

When I came to, I didn’t recognize any of my friends, and looked quizzically at the rope stretching from my harness like a colorful umbilical cord. I can still remember marveling at the view of the valley floor below and wondering who I was and how I’d gotten there.

It wasn’t until later in the ambulance